No sightings for a while then three very close together, always happy to receive them.

Herring Gull 787 was back on Radipole Lake Weymouth on the 20th June seen by Bob Ford. It was ringed in Weymouth originally in 2019.

Great Black Backed Gull P:05D left the delightful Island of Guernsey for Slapton Sands in Devon seen there on the 18th June by Perry Saunders. 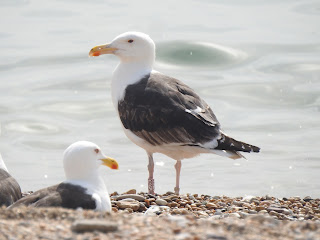 Photo Perrry Saunders
GBBGull P:43A which has graced this blog many times has been off the radar for some 4 months and then reappeared on Perelle Beach Guernsey on the 26th June seen by Wayne Turner. Previously it disappeared for a much longer period of time. It is of the right age to be breeding but where ?
A 10 year old  GBBGull which was ringed in 2012 now 10 years old. 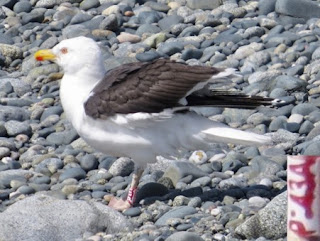 Posted by Portland Gulls at 09:27 No comments:

A sighting from Weymouth of a Herring Gull we ringed on the Break Waters in June 2019, this is the second sighting since then.

Seen by Penny Insole on the 9th May. 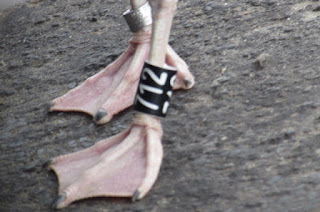 Posted by Portland Gulls at 11:56 No comments:

From a Birds of Poole Harbour Boat trip on the 30th May 2022 we have received a sighting of a Great Black Backed Gull P:05A breeding in the Lagoon on Brownsea Island.

GBBGull P:05A ringed by us in June 2012 one of our first. The only previous sighting was in November 2012 at Le sable de L'Onne Vendee France (French Atlantic Coast very popular with our Gulls). 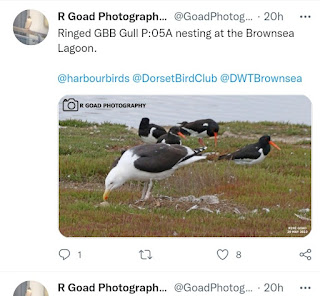 Posted by Portland Gulls at 05:13 No comments:

Richard Phillips has sighted another of our Great Black Backed Gulls also on Charmouth Beach Dorset.

GBBGull P:92D ringed June 2021 first sighting was October last year on Guernsey and now at Charmouth on the 16th May. 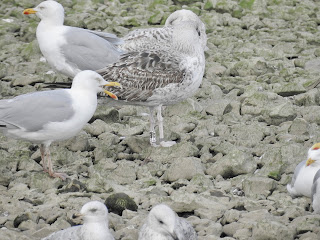 Photo Richard Phillips
Just short of a 7 year's for the first sighting, never mind as with all sightings it is very welcome. 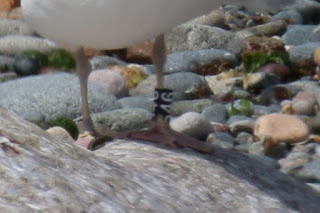 Posted by Portland Gulls at 02:58 No comments:

Thanks to Richard Phillips we have a sighting of Great Black Backed Gull P:18C. Seen at Charmouth Beach Dorset on the 10th May.

Posted by Portland Gulls at 11:13 No comments:

GBBGull P:62A was back on the Devon Axe seen by Ian McLean on the 22nd march ringed in 2014. An Axe regular with flights up to Chard on the Somerset Dorset Border.

GBBGull P:89D is becoming a regular visitor to Newlyn Harbour in Cornwall, latest sighting from Shaun Grose passed on by Mark Grantham West Cornwall Ringing Group. Seen on the 8th May originally ringed in June 2021.

Posted by Portland Gulls at 02:35 No comments:

A very welcome sighting from the North of Dorchester, inland sightings are not all that common.

Great Black Backed Gull P:20C seen in a filed on the 21st April by Allan Reese. 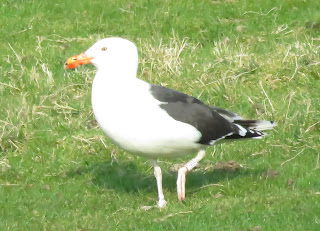 Photo Allan Reese.
Only two previous sightings since ringing in June 2017, from the Lizard and Newlyn Harbour Cornwall.

Posted by Portland Gulls at 02:48 No comments:

Portland Gulls
Joint project leaders Steve Hales & Terry Coombs. Portland Gulls is a project to colour ring Herring & Great Black Back Gull Pulli prior to fledging in order to track the movements of these Gulls. The colony is situated on the Break Waters of Portland Harbour Dorset England. The project is enabled with the support and assistance of The Portland Harbour Authority. In addition to colour ringing the Pulli every opportunity is taken to gather information on all the flora and fauna on the Break Waters as it is a isolated and relatively undisturbed habitat. The code for Herring Gull is White numeric on Black *** left leg below knee reading up metal BTO ring on right leg. Great Black Back Gull the code is Red Alpha numeric code on white ring P:*** left leg reading up with metal BTO ring on right leg. The coded rings for Herring Gull are also used in Weymouth Dorset and Seaton Devon the two projects run in tandem